Items per page
Sort by
all 382 items immediately available

Hardware for suitable prices at ServerShop24

You’re looking for a replacement for a failed hard drive, or you would like to upgrade your existing server? Then you have come to the right place. In our product range, you will find a large selection of used server hard drives at favourable terms. Our assortment includes items from well-known manufacturers in various types like different capacities, sizes (2.5” and 3.5”) or interfaces (SAS, SATA, PCIe). Furthermore, storage components are available.

Usual standards (HDDs) are represented as well as the latest technology (SSD, NVMe). On the capacities (nearly) no limits are set: from 300 GB, 900 GB to 1.2 TB (p.e. in the SAS area) up to 18 TB (SATA interface) – everything is possible. All of our hard drives have been tested for function and reliability before shipping. So, you can be sure that you will receive a well function product.

One point of buying server hard drives should not be neglected: The right tray is the key here. If you’re installing a hard drive in a desktop, you usually only need a data cable and maybe an adapter. Servers have – depending on the manufacturer and the model – a specific caddy. Of course, you can also purchase these in our shop. With a click on the category “trays / carrier” you will find suitable SFF or LFF caddies for your HPE, DELL or Fujitsu server.

Besides our large selection of server hard drives, you can also benefit from our lightning quick shipping times. All devices and parts that we offer in our online shop are in stock and directly available. If one of your servers fails, you will get the needed item fast so that you can directly replace it.

Our competent and friendly support team is there for you, if you have any questions. Please also contact us, if you’re not sure about the compatibility with your server. Choose one of our numerous contact options and take the most convenient way for you. By clicking the support button, you will find answers to frequently asked questions and a possibility to chat directly with us.

When you’re buying an HDD or a SSD for a desktop PC at home, you will try to find the maximum capacity at a minimum price. One difference to server hard disk – because here reliability and security are paramount.

The stored data of a company must be protected. These hard drives include sensitive customer information and important company documents. The related server or storage devices are normally not switched off and must be able to withstand 24 hours of continuous operation. This would not be feasible with drives from the consumer sector.

To guarantee this failure safety, other materials and higher quality levels are used in the production of server HDDs. Drives from the professional sector are not only characterized with their long lifecycle. Improved functions, a higher performance and lower susceptibility to errors are also properties of them. 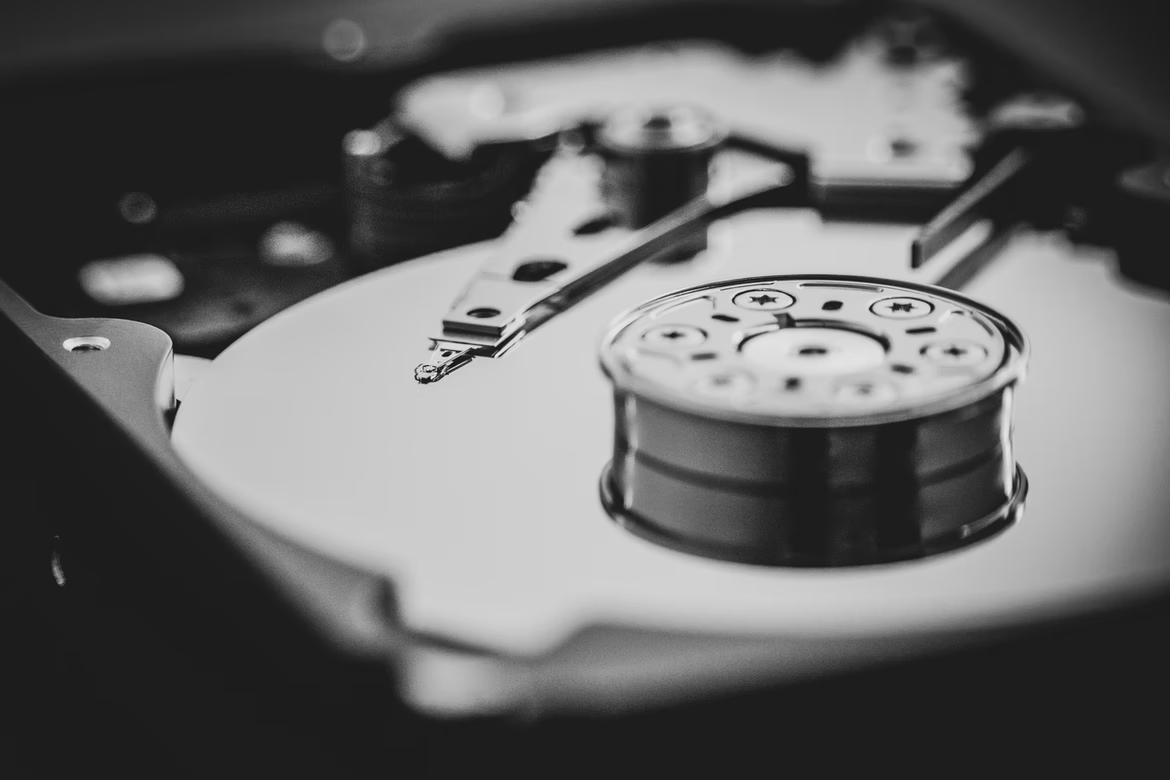 Things you should watch out for when buying used server drives

You can classify server drives in mechanical disks or flash memories. Depending on their interfaces, these can be subdivided into:

To find out which hard drive can be used for your existing server landscape, observe the following points: type, capacity, connection, and speed. Furthermore, the RAID controller of your device plays a role. The hard drives must be compatible with it (also in terms of connection and speed).

Also, make sure that the drive you’d like to buy is really a medium for professional use. Considerable manufacturers such as Western Digital, Seagate, HGST, Intel or Toshiba offer equipment in their product line that is especially suitable for servers. Even when it comes to a sensitive topic like protecting the company data, a high standard should not be renounced. Unfortunately, the costs for new goods in the server area are very high – but the IT budget itself is set narrow. Right here, the purchase of refurbished server components is very attractive. The technology and standards like SAS / SATA connections – or DDR4 for RAM modules – usually only change after several years. Used server parts are also state-of-the-art – but much more favourable than new goods.

At least, there is still a certain aversion toward used server hard disks. The argument “the default probability of used equipment is higher” is often used. The question is, if the continuous operation is harmful to the drive. However, this cannot be generalized – even if the hard disk has already various working hours behind it. Constant operation for high-end drives is less harmful than frequently on-/off-switching for the HDD of a desktop computer. Rather, the following point is a strong argument for refurbished disks: they’ve already been operating successfully. Production errors that can occur with new goods can be safely eliminated.

The low price of used goods has another advantage: You can provide your own “cold spare backup”. Simply setting a reserve by purchasing several hard drives. So, you prevent long delivery times when there is a non-critical failure of a single hard drive in a RAID array. It’s just secure for yourself so that you’re able to protect your important and sensitive data without an interruption.

Due to the different models of hard drives in the server area, there are also certain advantages and drawbacks. For example: you can build various drives with different interfaces in a machine like a DL380 Gen9 server. Which hard disk will be finally installed depends on the field of application and the performance requirements.

SAS (which means Serial Attached SCSI) disks usually have two ports. So, it’s possible to connect the disk to two different host adapters and prevent a controller failure. Or you can achieve a kind of channel bundling by combining the dual ports and doubling the maximum data rate from 6Gbit/s to 12Gbit/s.

It’s also possible to set up a redundant and extremely failsafe RAID system with several SAS disks. In case of a hard drive failure, you can change the defective HDD quickly and easily.

In general, SAS hard drives are less error-prone and have a long lifecycle. If there’s an unexpected outage, they offer the great advantage that you can change them during continuous operation (hot-swap).

Because of the downward compatibility, SAS hard disks are interoperable with SATA HDDs.  That means, you can combine them in one chassis. But you need a SAS controller for the SAS disks. The reverse method (SAS disks on SATA controller) is not possible.

While SAS hard disks can also be found in high-end devices, the SATA standard is more suitable for office servers or small business servers.

Similar to SAS, the data is passed also one after the other (so serially) through the cable on the “Serial-ATA” version. And you can also swap them – depending on the controller – during an operation.

So, where is the difference between SAS and SATA? In contrast to SAS disks, SATA usually have one port for power and one port for data – and so they also can be visually distinguished (see figure 1). Due to the lower speeds, the operation of SATA storage media is quieter than SAS. This and the low price also explain why these hard drives are used primarily in the desktop and notebook area. However, in comparison, SAS HDDs are typically characterized by a lower susceptibility to errors and, as a result, a longer lifespan. 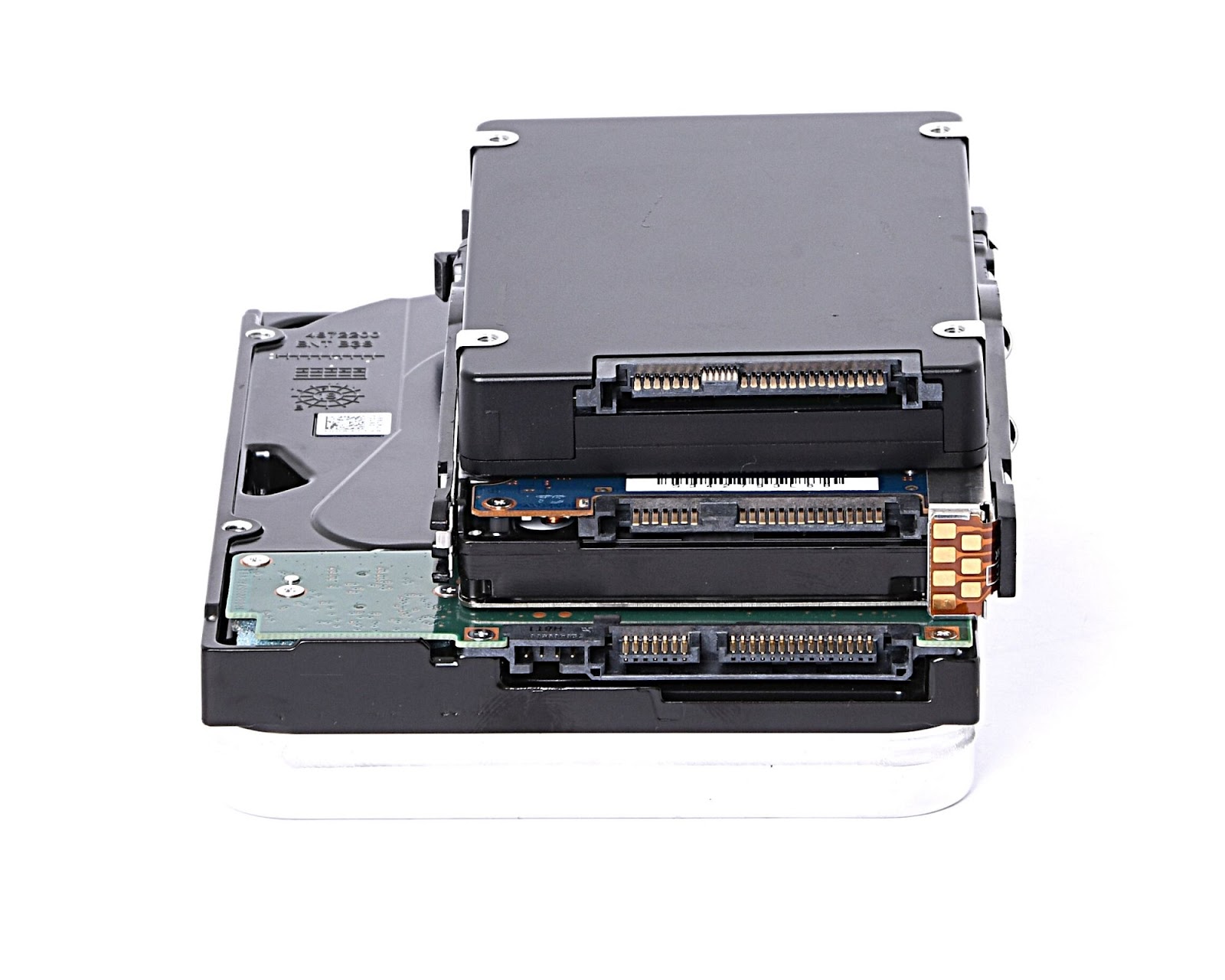 They are largely unaffected by vibrations, work silently and save data at an incomparable speed. The use of SSDs in the server sector may have been controversial a few years ago, but technology is so advanced today that there are several benefits. SSDs have significantly shorter access times and use less power than conventional HDDs. In addition, there are special “enterprise SSDs”. Contrary to “consumer” or “client SSDs” they were built for a challenging environment – which means specific for permanent operations. The use of SSDs is very useful where numerous requests have to be processed in the shortest possible time.

Similar to HDDs, there are also two variants of “flash memories”: SAS-SSDs (they also impress with their rapid data throughput of 12 or even 24Gbps) and SATA-SSDs (which are in this case also primarily used because of their flexibility and lower price).

You can connect the SSDs over PCIe interface with your server. The data will be transmitted with high speed on the CPU. So, you have a much better performance of NVMe-SSDs than conventional SSDs.

However, you have to check one thing before: does the hardware already have NVMe compatibility? You can find it out by checking the mainboard.

Also, in the times of cloud storage, hard drives play a major role. No matter if there’s a hacker attack or a disaster situation, companies must ensure that their data is sufficiently protected. A backup according to the “3-2-1 strategy” is recommended. This means that you have three copies of all important data. One of them is saved externally (i.e., in a cloud) and the other two copies are saved in different in-house storage systems.

Quickly, an enormous amount of stored information comes together – and we’re just at the beginning of the digital age. The proceeding digitization demands ever more and growing storage media. Both a company itself and cloud providers require very high storage capacities. Actually, only hard drives can meet these requirements. They’re currently not only the most economical medium, but also leaders in terms of capacity.

But what happens with disks that are removed from the data centres before their lifetime is exhausted? Even though the data carriers and servers are still functional, they will be destroyed. The much smarter way is using them again. With specific software, you can p. e. erase the HDDs safely – so that the data cannot be restored.

Acting in this way, also a SME can set up a fail-safe and professional backup – with low-priced used enterprise disks. This solution is not only inexpensive, but also sustainable because fewer goods have to be produced, and less waste is generated.